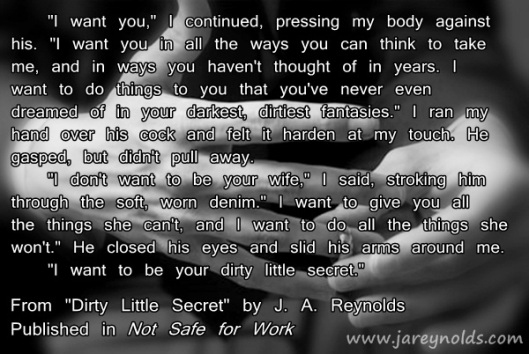 As I sat down to work out a story idea that was scratching around in my brain, I did what I usually do. I think about who the characters are, what they are like, what kind of personalities they have, and what’s going on in their life.

One of the most important things I consider when I’m starting to put the story down on paper is the conflict. I wrote a little while ago about how it seemed to me that stories with no discernible conflict are selling. How it seems that readers are looking for simple stroke pieces and not stories where the sex is less than perfect.

That aside, I still look at the story I want to tell and ask myself, “What is the conflict?”

I’m married, and I’m finding that lately a lot of my stories have had an infidelity theme running through them. I’m not sure why, exactly. After 16 years together, we’ve discussed the issue of cheating pretty often and we know where we both stand.

I confess that sometimes I feel lazy when I put married characters in a position to cheat. It seems like an easy conflict to me. But examining the reasons for cheating and getting inside the heads of people who have strayed–people who have broken their marriage vow to forsake all others–right now at this point in my life, that interests me. I’ve reached the point where honestly, I can see it. I can understand why it happens. I have been married long enough to know that marriage isn’t always easy, that happily ever after takes work, and it doesn’t take a whole lot to upset the apple cart. It really doesn’t take much at all, in fact.

I can understand the what if’s that come up. What if he meets someone else? What if her feelings of friendship turn into something deeper? What if you grow apart over the years instead of closer?

I’ve also found that lately among my married friends that the topic of cheating comes up from time to time. In online forums we’ve discussed what cheating actually is. In a world where people can connect emotionally without ever breathing the same air, it adds a new layer of complication. The emotional affair is as real as the physical one, and just as damaging. In my opinion, it’s more damaging.

I believe I’d rather have my husband fuck someone else for funsies than to find out he was in love with another woman he’d never so much as touched.

One of the more interesting definitions of cheating when it comes to online interactions was “Would you do it if your spouse was standing over your shoulder watching you?” If the answer is no, you’re cheating.

I’m still not a hundred percent sure I agree with that, entirely. I tend to be pretty much the same person I am when L. is around as when he’s not. I flirt at the same level in person whether he’s there or not. I’m an open book. I never pretend to be someone I’m not. I’m open and casual and I have lots of guy friends. There is flirting, online and in meatspace.

He’s okay with it. He knows. And he knows it doesn’t mean anything. He understands that it’s not about an emotional connection or about me looking for something I don’t have at home. It’s my personality and part of who I am, and he loves me for it.

But not all my friends can say that. Some of them are very different people when their spouses are around. Normally outgoing, sexy, friendly, carefree people put a muzzle on their personalities, and it confuses me. Why would your spouse want you to be someone you’re not? I don’t get it.

Be not another if thou canst be thyself.

Having said that, my husband I have secrets. We don’t need to know what the other person is doing all the time, or with whom, or what exactly is said. There are things I say to my online friends that I probably wouldn’t say with him over my shoulder. Not because he would disapprove or not understand, but there are things about me–kinks that I enjoy–that depend on secrecy. There are things that are sexier because they’re not shared directly with him.

For the longest time, I kept my erotica writing a secret from him. It was hotter knowing that people were getting off to stuff that I was writing without his knowledge. Not that he would disapprove, and when it got to the point that this little writing hobby might be a paying gig, maybe even (dare I say it?) a career, I told him. He didn’t flinch. He’s not much of a reader, though. I’ve written stories using my friends as inspiration and let him read them, and he’s still okay with it, though the stories themselves were just that much hotter to me when he didn’t know.

There’s something inherently naughty in secrets.

For me, cheating is anything that interferes in a negative way with our relationship. If it comes between us or pushes us apart, that’s a bad thing. If it doesn’t affect us, if it doesn’t touch his feelings for me, or mine for him, I’m okay with it. He can’t say the same thing, though. His definition and mine aren’t the same.

The thing is, if one partner would consider a particular behavior cheating, it holds the other partner to that standard. On the one hand, I can see that because it makes sense. If your behavior puts a wedge between you and your partner, it probably is cheating. On the other hand, I can see that taken too far. I know people with spouses whose are threatened by what could be considered next-to-nothing by any sane, rational person.

Humans are delightfully complicated, and if you let it, it makes for good reading.